I took up Shotokan Karate at the age of 8. Gaining 1st Dan black belt at the age of 11, and 2nd Dan at the age of 14, I knew karate was more than just a hobby. Throughout my martial art career I have become a fully qualified instructor, and the best part of karate to me is Kumite (fighting) where I have most notably gained the respect of the senior instructors.

From a young age I have gained top places in most competitions.  From this I knew I wanted to take my fighting to the next level which is a place on the England squad, however the criteria stated you had to be 14 years old.

I successfully gained a place just after my 14th birthday, and this is so far the greatest achievement of my career, even though I knew it was going to be tough. The England team involves both elite training on a regular basis, but also travelling across the country comes with it.

I have fought regionally, nationally and internationally. Most recently I came third internationally in individual fighting and 1st in team fighting. My next aim is to represent my country in the European championships in Zurich later this year. 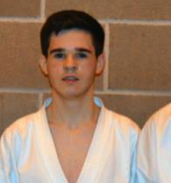