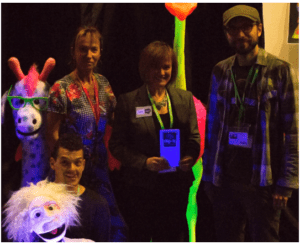 As part of the Dyslexia Awareness Week, Tamworth Sixth Form hosted the premiere of ‘I am Dyslexic’ by the talented film maker and director, Thom Davies, with special guest appearance by Andy Watson, a local puppeteer, who brings an awareness of dyslexia through puppetry and imagery.  This event was supported by Julie Capelton-Morgan from Dig-IT, the local Dyslexia Support Group, and the event highlighted the positive creativity of dyslexia – a hidden ability.